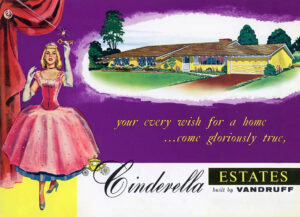 Once upon a time, even before Disneyland, Cinderella had her own housing tracts in Anaheim, Tustin, Costa Mesa, Placentia, and the San Fernando Valley. Author Chris Lukather will discuss his book, The Cinderella Homes of Jean Vandruff – Fairy Tale Tracts in the Suburbs, at the Orange County Historical Society’s Nov. 12, 2020 meeting at 7:30 p.m., online via Zoom.

Register here to RSVP for this online presentation:

In the 1950s, Southern California tract housing developments filled the need of a burgeoning population, but they often lacked innovation, imagination and quality. The plain box-style home tracts featuring little ornamentation came to define the term “cookie cutter.” It’s no wonder that designer and builder Jean Vandruff’s charming homes skyrocketed to popularity, since they exemplified a visionary translation of storybook magic into appealing new homes buyers could afford.

Eventually, over 6,000 Cinderella Homes were built throughout Southern California and the United States. Mr. Vandruff began building houses in Southern California in the early 1950s, after serving as a decorated pilot in WWII. He enrolled in the USC School of Architecture, but eventually left the program to build custom homes with his brother, Shannon.

His first Cinderella Home was a custom home built in Downey in 1953, creating a prototype for his wildly popular model home that was featured at the 1956 Los Angeles Home Show. The success and interest this model generated initiated his venture into tract home building and a subsequent franchise deal that facilitated his Cinderella Homes being built around the country. The style became an iconic mid-century design.

Today at 97 years old, Jean Vandruff still lives near Anaheim. He is proud of the legacy of his work as a designer and builder, and remains active in the community that still today celebrates his Cinderella homes.

This program was originally scheduled for March but was postponed due to COVID.