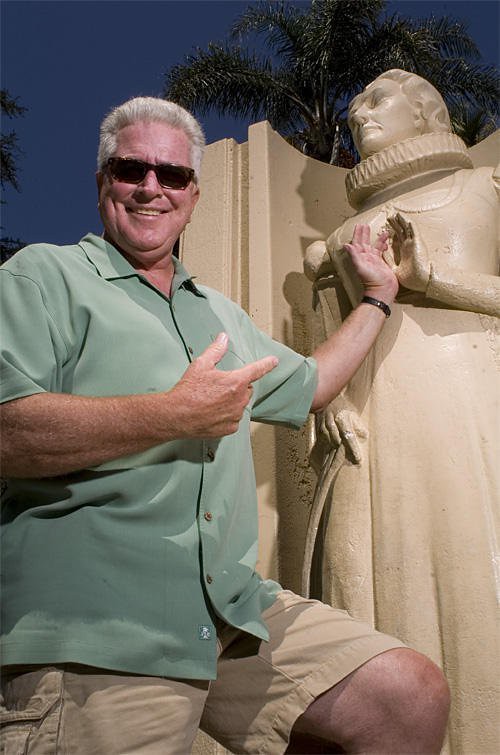 Our monthly program, a tribute to the late Huell Howser, will be delivered on Thursday, February 14, 2013, 7:30 p.m., at Trinity Episcopal Church, 2400 N. Canal St., in Orange. (Photo at left from the Anaheim Historical Society Flickr site shows Huell Howser posing with the statue of Madame Modjeska at Pearson Park in Anaheim. Click the image to view this page at Flickr.)

This event will feature a panel of local historians who will share experiences of giving the enthusiastic public television host a tour of their community in a “California’s Gold” episode: Cynthia Ward (Anaheim), Phil Brigandi (Orange), Linda Jennings (Tustin), and Stephen M. Rios (San Juan Capistrano). Also included in the panel will be Rand Boyd, Special Collections & Archives Librarian at Chapman University’s Leatherby Library, where Huell donated his notes and digitized collection of “California’s Gold” episodes filmed between 1991 and 2001.

On this special evening, we’ll not only find out what the personable show host was like off camera, but we’ll also view never-before-seen footage of Huell in Orange County, and perhaps revisit a few “golden” moments from local episodes we watched on t.v. years ago.

So join us on Valentine’s Day, on a trip back in time to remember Huell and his contributions to our own history, and to revisit places in Orange County that will always be a part of “California’s Gold.”