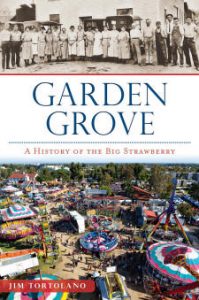 Author Jim Tortolano will discuss the colorful history of Garden Grove at the next meeting of the Orange County Historical Society, Nov. 10, 2015, 7:30 p.m at Trinity Episcopal Church, 2400 N. Canal St., in Orange. Tortolano’s book, Garden Grove: A History of the Big Strawberry, was published in 2015. This event is open to the general public at no cost.

The first pioneers began settling the Garden Grove area in the late 1860s – the era when the ranchos were breaking up and parcels of land were being sold to farmers and developers alike. In 1876, Alonzo Gerry Cook laid out the small crossroads townsite of Garden Grove – a name first applied a year earlier to the local school district. This section of the Santa Ana Valley was largely barren land, with barely a tree to its name, much less a garden. But Cook was determined that through hard work the town would soon live up to its name. And indeed, it would.

Over the decades, the community would reinvent itself numerous times, adapting to changes in agriculture and population, decline and development, disaster and triumph. When the railroad arrived in 1905, the population doubled. The town flourished as an agricultural hub thanks to the bounties of oranges, walnuts, chili peppers and the crop that earned the city’s nickname—the strawberry.

The resilient little town bounced back after extensive damage in both the Long Beach earthquake of 1933 and the flood of 1938. During the post-WWII years Garden Grove was among the fastest growing communities in America, and it finally incorporated as a city in 1956. Today, the city has a diverse population of over 170,883.

Our speaker, Jim Tortolano, is a Garden Grove resident and veteran journalist, who has worked at the Long Beach Press-Telegram, Orange County Evening News and Los Angeles Times in editing and reporting jobs, and served as editor and co-owner of Garden Grove Journal for 30 years. He is currently a professor of journalism at Golden West College, and was previously a military reservist and television sports broadcaster.