Join us the day after Richard M. Nixon’s 100th birthday for a thoughtful discussion of his life and legacy by The Reverend Canon John H. Taylor. The program will be held Thursday, January 10, 2013, 7:30 p.m., at Trinity Episcopal Church, 2400 N. Canal St., in Orange.

Richard Nixon – one of the most fascinating and controversial figures of the 20th century – was born January 9, 1913 in the small town of Yorba Linda. Today, the area’s rolling hills, unassuming downtown, occasional patches of open land, and tinges of rural roots remind us of the agricultural Orange County of Nixon’s youth. Nixon’s favorite menu items are still marked at Mexican restaurants like El Adobe in San Juan Capistrano and Olamendi’s in Capistrano Beach. Surfers still point out Nixon’s “Western White House” in San Clemente. And of course, the Nixon Library and Birthplace is the primary place where researchers and the general public come to better understand the 37th President of the United States. Although he moved back East in 1980, Nixon’s imprint on Orange County is everywhere. (Pictured above is a recent photo of the Nixon Library and Museum taken by Chris Jepsen; click the image to view it larger.)

Our guest speaker John Taylor joined the staff of former President Richard M. Nixon in 1979, becoming his chief of staff in 1984. He traveled with Nixon to the Soviet Union, China, and many other countries, helped with six of his books, and assisted in planning the Nixon Library in Yorba Linda. Named the library’s director in 1990, Taylor oversaw President and Mrs. Nixon’s funerals in 1994 and 1993. As co-executor of Mr. Nixon’s estate, he helped pave the way for the opening of the Nixon White House tapes and other historical materials. And in 2007, he coordinated the library’s entry into the federal government’s system of presidential libraries.

Taylor received his Master of Divinity degree in 2003 from the Claremont School of Theology. He was ordained to the diaconate in 2003 and to the priesthood in 2004, and is now the full-time vicar of St. John Chrysostom Episcopal Church and St. John’s Episcopal School in Rancho Santa Margarita. For the Episcopal Diocese of Los Angeles, he currently serves on the Commission on Ministry, Commission on the Middle East, and Committee on Constitution and Canons. He is chair of the Committee on Resolutions. 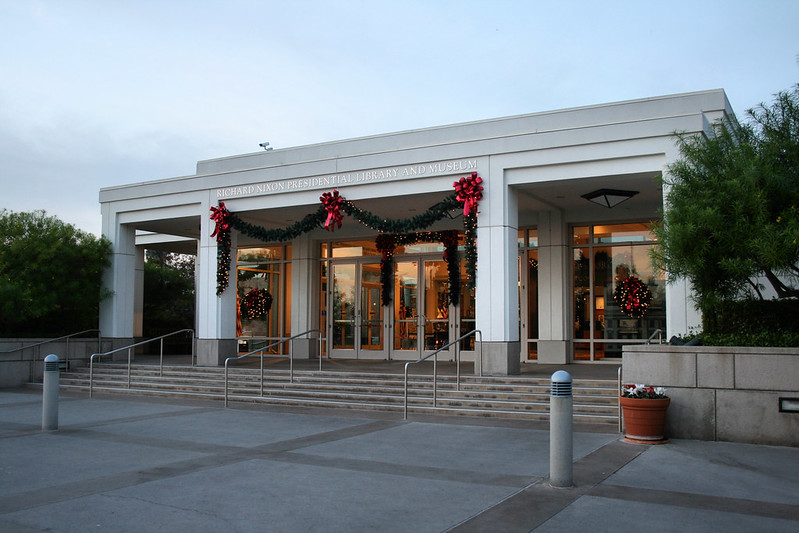 This is the third time this popular and crowd-pleasing event is being hosted, but each one is unique since attendees share historical artifacts, heirlooms, and memorabilia from their personal collection with members of the Society and other guests.

At the last event, Phil Brigandi brought a mysterious knife from his family collection, seeking to find out more about its history. (See Chris Jepsen’s write up about this event and Phil’s knife at http://ochistorical.blogspot.com/2012/01/mysterious-knife-and-some-local-history.html.)

What will we uncover at this month’s meeting? Perhaps a tool used for picking oranges or avocados? Or a name badge from your employment at Disneyland that you wore on opening day. Maybe your great-grandfather’s branding iron? Or an outstanding photo of Orange County that few have seen before.

A sign up sheet will be posted at the front door, and those who brought an item to share will be called forth—in the order on this list—to share their item.

Whatever the night will bring, we look forward to the surprises in store for us!

Hear authors of the latest Orange County history books discuss their work, and then have a chance to meet them, buy their books, and have them signed at OCHS’ annual “Authors’ Night” program on Thursday, November 8, 2012, 7:30 p.m. at Trinity Episcopal Church, 2400 N. Canal St., in Orange. This event will also mark the release of Orange Countiana, Vol. 8—this year’s OCHS historical journal. Contributors to the journal will also be on hand to sign copies. (A copy of the journal comes with OCHS membership, but additional copies will be available for purchase.) Between books and journals, this will be a great opportunity to do some holiday shopping—for others or for yourself. The event is open to the public and refreshments will be served.

Some of the authors and books you can expect to find at this event:

Mike Heywood – Orange County: Twelve Decades of Extraordinary Change. Heywood is a historian for the Huntington Beach Coordinating Council which supports service groups in the community and retired insurance executive. His second book provides his view of O.C. from 1889 to 2010.

Ted Dougherty – Knott’s Halloween Haunt: A Picture History. Dougherty’s book, which arrives in time for Halloween Haunt’s 40th Anniversary, features images and anecdotes about this annual event which has grown into an enormous 5-week juggernaut emulated by other theme parks around the world. The author also operates UltimateHaunt.com online.

Chris Epting – Baseball in Orange County. No stranger to our Authors’ Night events, Epting’s latest book explores America’s favorite pastime as it was played in Orange County. A noted pop-culture historian and a frequent collaborator with Arcadia Publishing, we’re curious to see what he’s written about one of his great passions: baseball.

Phil Brigandi – Orange Countiana Volume VIII. Brigandi, our intrepid editor, will be presenting OCHS’ latest historical journal, along with perhaps two of the contributors to this edition who are both members of the Society:

John M.W. Moorlach, C.P.A., contributed a first-hand account of “The Orange County Bankruptcy” to our journal. Moorlach has served as Supervisor for Orange County’s 2nd District since 2006, and was appointed Orange County Treasurer-Tax Collector following the resignation of Robert Citron in the wake of the county bankruptcy. A former member of the Board of Directors of the Costa Mesa Historical Society, he also served as Vice Chairman of the California State Sesquicentennial Foundation.

Froy Tiscareño, author of several books, contributed an article about his memories of colorful Orange County figure and historian William McPherson as well as tales of his Mexican-American family’s life in Orange County during the first half of the 20th Century. Tiscareño, who taught mathematics at Mt. San Antonio College for 27 years and currently teaches at Irvine Valley College, came to O.C. from Mexico in 1949, settling in the little town of McPherson, near El Modena.

Join us on Saturday, November 3, 2012 for a trip along the Arroyo Trabuco to visit the ruins of the Trabuco Adobe, a mission outpost and later rancho headquarters. Historian Phil Brigandi will discuss the history of the adobe and the arroyo along the way. The 1-1/2 to 2 hour hike begins at 8:30 a.m.

This is about a two-mile roundtrip, moderately easy hike, but with one steep grade in and out of Trabuco Creek.

Where: Meet at the Arroyo Vista Trailhead, O’Neill Regional Park, Arroyo Vista and Paraiso in Rancho Santa Margarita. Parking is available on the street.

Reservations are a MUST. Additional information about the hike will be provided as part of your confirmation.

A memorial service for Orange County’s premier historian, Jim Sleeper, at noon, Friday, October 12, 2012 at Waverly Chapel at Fairhaven Memorial Park in Santa Ana. Jim passed away on September 27, 2012. Either directly or indirectly, he impacted everyone who cares about Orange County’s history. We hope to see you at his memorial service, which will be open to the public.

More than just the author of at least eight of our best history books and hundreds upon hundreds of well-researched and startlingly well-written articles, Jim was also a hero and a friend to many.

Jim was active in the Orange County Historical Society for more than 70 years. In 1970, he served as our president. He was also the co-founder of our County Courier newsletter, and was still on the Editorial Board of our Orange Countiana historical journal at the time of his death. He will be greatly missed.

Once called the biggest Halloween celebration west of the Mississippi, the Anaheim Halloween Festival began in 1924 and grew to capacity crowds in the late 1950s, with estimates of more than 150,000 people traveling from all over the Southland to attend this city’s celebration. These days, the Anaheim Fall Festival and Halloween Parade bears only a slight resemblance to its predecessor, but rest assured, this month’s presentation will conjure up the sprites, hobgoblins, and broom-tooting witches of the past. We promise, you’ll be spellbound in discovering the Festival’s disputed origins, bewitched by the Slick Chicks, and howling after learning who was behind the ousting of the Steve Allen, the 1970 parade’s grand marshal. Eek! Finally, the unexplained will be explained as we explore this city’s long tradition of Spooktacular!

Stephanie George, an Anaheim native, is the archivist at the Center for Oral and Public History at California State University, Fullerton, as well as the recording secretary for the Orange County Historical Society, president of the California Council for the Promotion of History —and second place costume contest winner at the 1962 Anaheim Halloween Festival Pancake Breakfast.

Orange County’s role in California Style watercolor painting will be the subject of the Orange County Historical Society’s season kick-off program on Thursday, September 13, 2012, at Sherman Gardens, 2647 E. Coast Highway, in Corona del Mar. If you’d like to participate in the Society’s appetizer and dessert potluck beforehand, arrive at 6:30 p.m. with a plateful of goodies. Otherwise, arrive in time for the 7:30 lecture by author, historian, exhibition curator and art dealer Gordon T. McClelland.

From the 1930s through the 1970s, an innovative approach to watercolor painting called the California Style, flourished in Southern California. Artists like Rex Brandt, Phil Dike, and Emil Kosa, Jr. were considered part of the American Scene or Regionalist movement and often painted scenes of everyday city and suburban life. Their work featured bold design, creative use of the white paper as a “color,” and highlighted the transparency of their unique medium. One of the key schools that taught this approach to creating art was the Brandt-Dike Summer School of Painting in Corona del Mar.

The presentation will feature outstanding examples of California watercolors inspired by scenes in Orange County, with an emphasis on works painted in and around Newport Beach. McClelland will also address the historical and artistic importance of these works both locally and nationally.